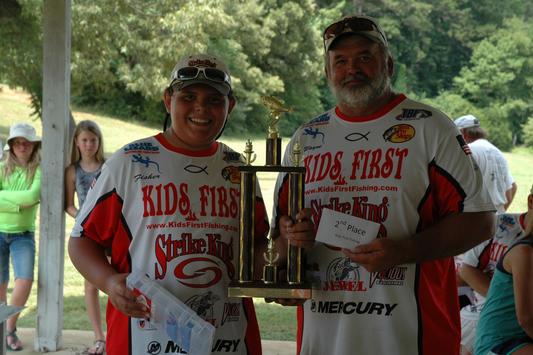 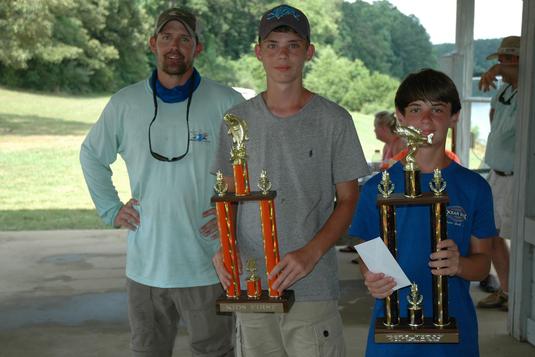 The key word for today was HOT!  Despite the upper 90’s temperature and lack of any wind Kids First was excited to have 23 teams and 28 youth came out to try their luck in today’s tournament!  Even with the heat, lack of wind, and lack of current 18 teams weighed one or more fish.  We had nine teams bring in 5 fish limits today, which was quite an accomplishment and a testament to how good our teams are becoming.  Blast off was a little different today.  We had several teams fishing in the TBF High School World Championship tournament, and for those anglers Pickwick was off limits.  Those teams and a handful of others trailered below the dam and fished the river, while the rest of the field fished Pickwick.

The team of Scott Spain, Scout Kee, and Allen Terlecki figured out the ledge bite and brought an a full bag topping the scales at 15.92 pounds earning them first place.  Scout brought in a 5 pound largemouth and Allen weighed a 4.01 largemouth which will help them move up the Youth AOY rankings.

Third place was taken by the team of Tim Young and Clayton Pollock.  Their five fish bag weighed 13.67 pounds.  Clayton brought in a 2.91 pound largemouth helping him move up in the Youth AOY standings.

The Big Bass trophy was won by the team of Chris and Jacob Lambert with a 7.44 pound largemouth.

The team AOY points race is really heating up!  Only 5 points separate the team Holmes and team Loflin.  Things will get interesting at our next tournament as we drop the lowest finish of the year, which will be sure to shake things up a bit.

The youth AOY races are also heating up.  In the 10 and under group less than a pound separates Layton Monroe and Tylen Anderson.  In the 11-14 year old group Fisher Holmes holds a commanding lead with 18.10 pounds.  In the 15-18 year old group less than a pound separates Logan Ward and Blake Loflin.  We will also be dropping the smallest fish from each of the Youth AOY groups so things are sure to change up.

Today’s tournament sponsor was The Bass University.  In addition to the subscription to Bass U provided earlier in the year, today the provided flambeau Tuff Tainers and VMC Rugby jigs to all of the kids.  Door prizes were provided by Top of the River, B&B Outdoors, Floral Connection, Big Hill Pond Boat Sales & Service, Bill Dance Outdoors, Mercury, Bass Pro Shops, and Mike Whitten.  A huge thank you to all of the companies and individuals that donate to Kids First and help make us a success!

Our next tournament is July 16, 2016 at Pickwick Landing State Park.  The weigh in will be a little different than normal.  At 2 pm we will weigh fish, following the weigh in we will all caravan to The Top of the River in Michie, TN for our year end banquet.  Mom’s and siblings are welcome to join us.  It is about a 15 minute drive straight down HWY 57.  While we feed everyone we will give out the day’s trophies and prizes followed by our AOY presentations.  Saturday 7/16/16 will also be our last day to sell raffle tickets for the $200 Lonnie’s gift card.  This raffle is how Kids First pays for the adults Top of the River dinner so please bring a few dollars to help out and get a chance to win a $200 gift card! 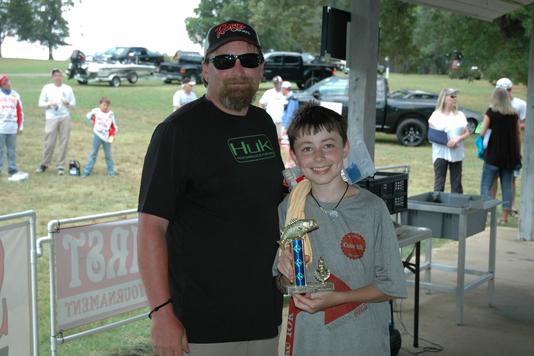 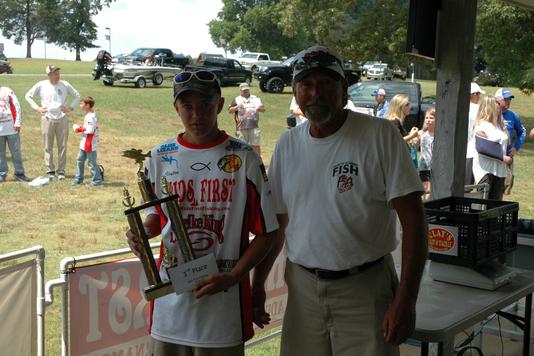